Geology of the Area Southwest of Florence, Fremont County, Colorado

Geology of the Malachite Mine Jefferson County, Colorado

The Geology of Star Basin and Star Mine Gunnison County, Colorado 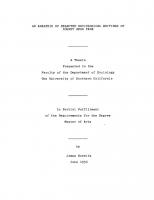 An analysis of selected sociological writings of Robert Ezra Park

A thesis submitted to the Faculty and the Board of Trustees of the Colorado School of Mines in partial fulfillment of the requirements for the degree of Master of Science.

INTRODUCTION PURPOSE AND SCOPE OF THIS INVESTIGATION

GENERAL FEATURES OF THE ORE DEPOSITS........

Petrography and Petrology of the OreBearing Sandstone ........

Thickness of the OrerBearing Sandstone..

3» Composite stratigraphie column of the Morrison and Summerville formations.........

10, Isopach map of mudstone alteration beneath ore-bearing sandstone in the Black Dinah area........

3. Cross sections of the First National Bank and Virgin mines.....

Long Park Is located on the northeast flank of the Paradox salt anticline, in western Montrose County, south­ western Colorado.

The area is acceaslhTe in all seasons

by a gravel-surfaced road. Uranium-vanadium bearing deposits which are presently being exploited are in the upper sandstone beds of the Salt Wash member of the Jurassic Morrison formation.

deposits generally follow the bedding of the sandstone except where the mineralization cuts across the bedding in elongate, concretionary forms. The various ore horizons of the mineralized areas of Long Park are found generally in the lower half of the ore-bearing sandstone, but some have been found in the upper half.

The sizes of the ore-

bodies vary from a few tons to many thousands of tons. Mineralogy of the deposits varies -from relatively

exist between these two types of deposits, and some of the mines show scattered unoxidized remnants in ore that is mainly oxidizedo Ore-bearing sandstone in the vicinity of the orebodies is gray or tan and, in oxidized environments, shows limonite staining®

The mudstone immediately beneath the

ore-bearing sandstone may be bleached from an original red to gray or green, and no known important orebody exists where this alteration is completely absent beneath the area of mineralizationo In mineralized horizons of the ore-bearing sandstone, fluvial structures, such as festoons and other scour and fill structures, are more manifest than in surrounding barren areas « These sedimentary structures trend mostly in southeast and northeast directions «

The axes of elongate

orebodies generally parallel the dominant sedimentary trends of the area in which they are located. Axes of elongate orebodies frequently correspond to axes of paleostream channels in the ore horizon.

sandstone, and are commonly oriented with their long axes parallel to the general trend of the basal paleostream scouring» These scours at the base of the ore-bearing sandstone can be detected by the configuration of the structure contours drawn on the base of the ore-bearing sandstone. Paleostream channels in the ore horizon show varying lithologies*

associated with these channels, and frequently occupy cen­ tral positions in the paleochannels. Thickness of the ore-bearing sandstone varies from 15 to 115 feet, but the majority of the deposits are local­ ized in areas where the thickness of this unit is from 35 to 55 feet. The origin of the deposits is not clear, but most evidence points to an epigenetic origin.

appear to have been introduced after deposition, compaction, and cementation of the ore-bearing sandstone.

denced by (1) the ore minerals replacing the cementing materials and (3) observations of the ore in place showing the mineralization frequently sharply transecting the bed­ ding of the ore-bearing sandstone, and (3) lack of evidence of erosion of the orebodies which probably would be present should a syngenetic origin apply to these deposits.

dence for this conclusion is (1) the findings of Steiff et al (1953) who show that the ore was not deposited by reconcentration of previously existing mineralization in the sedimentary column, and (2) the presence of igneous activity in the La Sal Mountains northwest of Long Park which may be related to a deeper seated magma that possibly could have been the source of the uranium and vanadium mineralization» The ore solutions are believed to have behaved essentially as ground waters and to have traveled in the more permeable paleostream channels in the ore-bearing sandstone before being deposited in favorable chemical environments *

PURPOSE AND SCOPE OF THIS INVESTIGATION Long Park is an area in which uranium-vanadium mineral deposits occur in sedimentary rocks• The purpose of this investigation was to determine sedimentary controls of ore deposition in a part of the Long Park group of mines.

addition, it was hoped that the origin of these ores could be ascertained.

LOCATION Long Park is situated on the northeast flank of the Paradox anticline in the northwest part of Montrose County, southwestern Colorado, Township 47 N., Range 17 W., Sections 27, 28, and 34. road.

seven road miles to the north of Long Park.

shows the location of Long Park®

CLIMATS The climate of this area is semi-arid, and the average annual precipitation is 15 to 20 inches (Hunt, 1956, p® 7)® Relatively light snowfalls account for most of the precipi­ tation during the winter months, and thunderstorms are common during the fall and spring®

Summers are hot and dry®

TOPOGRAPHY The central portion of Long Park is at an average elevation of 6400 feet.

The park is flat and featureless,

DRAINAGE Long Park and vicinity is drained by two master streams, the Dolores and San Miguel rivers » Their loca­ tions with respect to Long Park are shown in Figure 5»

intermittent, non-integrated drainage occurs in Long Park, with drainage mainly to the northeast, where it joins the northerly flowing San Miguel river. Consequent drainage is predominant and deeply incises the exposed sedimentary rocks. This drainage is particu­ larly evident where these streams cut through the resistant Burro Canyon formation and the Brushy Basin member, pro­ ducing isolated dip-slope ridges, elongate in the direction of stream flow.

Subsequent drainage is in initial stages

of developmento Obsequent, intermittent drainages are present one mile to the southeast of Long Park.

into the Paradox Valley and ultimately join the Dolores River. The youthful, non-integrated drainage and rugged topography of Long Park aid vicinity are characteristic of youthful plateau landforms»

METHODS OF INVESTIGATION The geologic setting of Long Park, as illustrated in Plate 1, was investigated by surface mapping on aerial photographs of an approximate scale of 1 :9600o

mine mapping phase of the field work was limited to the mines illustrated in Plate 1» Approximately five months were spent in the field» Three were spent in mine mapping, one in surface field mapping, and one in examining drill logs and diamond drill cores « Laboratory work was conducted at the Colorado School of Mines.

It consisted of the examination of collected

rock and mineral specimens, drafting of geologic maps and sections, and microscopic examination of thin and polished sections of rock specimens collected in the field*

ACKNOWLEDGMENTS The writer is indebted to the Union Carbide Nuclear Company, who generously financed a portion of this work, and allowed access to its mines and drill hole data. The late Mr. E. M. Paris was Manager of Mines for the Union Carbide Nuclear Company at the time the field work was in progress, and he assisted the writer in numerous ways.

The entire staff of the Mining Department, Union

Carbide Nuclear Company, Uravan operations, cooperated extensively with the writer and provided invaluable help and advice «, Special gratitude is due to the Union Carbide Nuclear Company mine lessees in the Long Park area who cooperated extensively with the writer. Mr. Robert Boardman, United States Geological Survey, and members of his field party assisted the writer greatly by supplying advice concerning geology of Salt Wash uranium-vanadium mineral deposits. The staff of the Geology Department, Colorado School of Mines, helped the writer in innumerable ways in preparing this manuscript.

writing of this manuscript and gave valuable criticism concerning the section on stratigraphy.

Hutchinson and R. C. Epis aided greatly in the petrological problems of this thesis by helping the writer examine

PREVIOUS GEOLOGIC WORK A description of the Long Park area was included in a report published by Coffin in 1921.

was conducted in the area during World War II.

was not published, however, and the information was not available to the writer. A surface geology map, scale 1:24000, was published by the United States Geological Survey in 1955 as a result of the field work of Cater, Butler, and McKay.

GENERAL STRATIGRAPHIC RELATIONS The exposed lithologie sequence of the Long Park area consists entirely of sediments• They range ip age from Upper Triassic in the southwestern portion of tjie area to Early Cretaceous on the eastern boundary of the Park* The total exposed thickness from the top of the Chlnle formation (Upper Trlassic) to the lower boundary of the Burro Canyon formation (Lower Cretaceous) is approximately 1500 feet (Cater et al, 1955).

illustrates the general stratigraphie relations of Long Park. On the southwestern flank of the Uncompahgre uplift, 16 miles to the east, Precambrian igneous and metamorphic rocks crop out.

%es e rocks, as well as the Permian Cutler

and Trlassic Moenkopi formations, undoubtedly underlie the Long Park area• The oldest formation exposed in the vicinity of Long Park is the Trias sic Chlnle• This unit is exposed to the southwest of Long Park, but due to normal faulting, the exposure is incomplete*

At present, all of the commercially ex­

ploited uranium-vanadlum mineral deposits of Long Park occur in the upper sandstones of the Salt Wash member. Exploration has been directed mainly toward the develop­ ment of ore deposits in this horizon.

The relation of this

horizon to other stratigraphie units in Long Park is shown in Figure 2» Detailed stratigraphie sections of the Jurassic Summer­ ville formation and Brushy Basin and Salt Wash members of the Morrison formation were measured at localities 1-1 and 2-2 (Plate 1), and illustrated in Figure 5*