Empire of Great Brightness is an innovative and accessible history of a high point in Chinese culture, seen through the

During the thirteenth century, the Mongols created the greatest empire in human history. Genghis Khan and his successors

This engaging, deeply informed book provides the first concise history of one of China's most important eras. Leadi 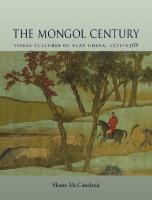 The Mongol Century explores the visual world of China's Yuan dynasty (1271–1368), the spectacular but relatively sh

In the past, our ideas of psychiatric hospitals and their history have been shaped by objects like straitjackets, cribs,

Film and television create worlds, but they are also of a world, a world that is made up of stuff, to which humans attac

My only fear, Joss of character Improper these eighty years! Now is death Only a wall away Like or not like, True or not true? High and low - shadows outside the self. Man's death and life - a single dream.'

There may well be an awareness here of the very act of the portrait's existence as indicating a distinctive visual culture of old age, at least in the ifteenth century, when the view was still being expressed by experts that it was a bad idea to have a portrait painted at all before the age of 30, lest it rob you of vital energy. And as we shall see the association of portraiture with funerary and commemorative practices meant that the very format trailed behind it an aura of the venerable and the liminal, standing between life and death, between the present and the absent.8 More than a hundred years after Shen Zhou mused on his own painted evidence of mortality in the pems given above, and on his status as a man in the antechamber to the afterlife, the writer Chen Jiu (155-1639) could complain in an essay:

Without an understanding of the Way, how could one get through the Pases of the Four Words - Life, Age, Illness and Death? There is nothing more pathetic than the ageing and illness of beautiful women and celebrated generals...When rosy cheeks are replaced by white hairs, when a tigerlike, gallant young warrior tus into an old man with wrin• kled skin, what pleasure is there any more?"

His stress on the consolations of philosophy is here somehow less convincing than his invocation of the withered cheek and the wrinkled skin that are the inevitable result of ageing. In a seminal article on 'Chinese Concepts of Old Age and Their Role in Chinese Painting, Painting Theory and Criticism', Jerome Silbergeld argued for two groups of attitudes around this topic. One, which he identifies as having predominantly Confucian roots, is seen as clustering round notions of filiality and respect for the aged. The other, more Daoist, set of

Original from UNIVERSIY OF MICHIGAN