Investigation of the Graphite Nodule, with Special Reference to Its Relation to the Nodulizer

An experimental investigation of phosphino compounds of boron hydrides 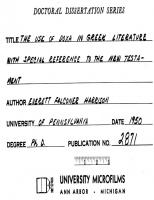 The use of doxa in Greek literature with special reference to the New Testament. With reference to Reading 1 of the first day, the adapta­

On the sixth day, after the lapse of

ten days, the corresponding reduction in the first reading was only 36.7 per cent. Condition II In Condition II a different-250-word passage was read five times in succession on each of the seventh, aignth, ninth, end tenth days of the experiment.

The mean frequencies of stuttered words in all readings

of the four passages are presented in Table V. Between Reading 1 and Reading 5, on the seventh day, the mean was reduced from 47-75 words to

Table ? Mean Frequency of Stuttered Words in the Five Headings on Each of Four Days in Condition II

Therefore, the reductions of

stuttering in all the passages were approximately the same. In Reading 5 on all four days, and particularly the last three days, the mean frequencies of stuttering were also roughly sirailar; 20.70 on the seventh day, 16*32 on the eighth, 15*37 on the ninth, and 15*67 on the tenth. There was a consistent tendency for the frequency of stuttering to be reduced in each successive reading of each different passage.

in means was shnwn for the five readings on the eighth, the ninth, and the tenth days, when different content material vms read each day.

each day the largest decrease in stuttering occurred between Readings 1 and 2, and the decrease in means became progressively smaller in Reading© 3, 4, and 5* The decreases in mean words stuttered in the five readings of each day are shown graphically in Figure 2.

The shapes of the four

In each, a sharp decline occur© between readings 1 and 2,

after which each curve progressively levels off In the three last readings. Table VI shows the results of the test of significance applied to

The corresponding value for the ninth day was 20.0 per cent, and

The decrease in the frequency of

stuttering attained in any one day carried over only to a slight degree to Reading 1 of the following day when a different passage was read.

greatest adaptation in stuttering v>,as revealed in Reading 5 on the eighth, ninth, and tenth days, when the number of stuttered words was reduced from Reading 1 on the seventh day 65*4 per cent, 67.4 per cent, and 66.7 per cent, respectively. Comparison of Adaptation in Conditions I and II Each day in both Conditions I and II there was a decrease in mean words stuttered between Readings 1 and 5* In general this decrease became progressively smaller each day for the first five days in Condition I, when the same passage was read on all days.

day after the interval of ten days, the decrease in means again became larger, due chiefly to the relative increase in stuttering on Reading 1. In

II, when different material was read each day, the decrease

36 in means remained fairly constant from day to day.

I and II, the mean differences between Readings 1 and 5 on all days were significant beyond the 1.0$ level of confidence. The mean number of words stuttered in Reading 5 on all days in both Conditions I and II were very similar.

In Condition I these means

varied from 14.22 to 18.96, and in Condition II, from 15*37 to 20.70. In every day*s readings in both Conditions I and II, there was a systematic decrease in mean stuttered words in successive readings from 1 to 5* Each day the largest decrease in means occurred between Readings 1 and 2, after which the decrease became progressively smaller in the three last readings. The curves obtained by plotting the mean number of stuttered words in the five readings of each day in both Conditions I and II are all of the same general shape.

All show a sharp decline between.Readings 1 and

2, after which each gradually levels off in the three last readings of the day.

All may be described as negatively accelerated positive curves.

In Condition I, however, the curves tend to flatten out after the third day, until the sixth day is reached. The four curves in Condition IIall have the same general form as the curve of

the first day *s reading in

Condition I. The percentages of adaptation were similar in

Conditions I and II.

The percentages of stuttered words in both Conditions were reduced between 56.8 and 68.6 per cent in the final readings of the various days. When the same material was read each day, the greatest adaptation occurred the second day in Reading 4, a 68.6 per cent reduction from the frequency

37 of stuttering in Reading 1 of the first day.

was read each day, the greatest adaptation was reached on the ninth day in Reading 5, the percentage of stuttering being reduced 6?*4 per cent from the frequency of stuttering in Reading 1 of the seventh day. The outstanding differences between percentages of adaptation in Conditions I and II were found in the first readings of the different days.

In Condition I, when the same reading material was used, the

percentages of adaptation in Reading 1 of the successive days were lauch larger than the percentages in the same readings in Condition II, when different material

as read each day.

there was not the same cany-over effect (more spontaneous recovery) from one day to the next as when the reading material was kept constant. The readers adapted better when both the reading content and the reading situation remained constant, as in Condition I, than when the situation remained constant but the reading content varied, as in Condition II. Effect of Time Interval in Condition I The same material was read five times in succession on each of five successive days, and again on a sixth day after an interval of ten days, in order to determine the influence on frequency of stuttering of a 24-hour interval, and of a ten-day interval, respectively, between the reading series.

The means of the first and last readings on each day

of Condition I are shown in Table VIII, and is illustrated graphically in. Figure 3.

The first day the means were reduced from 43-83 stuttered

stuttering was temporary, however; on the second day in the first reading the mean frequency rose to 30